Posted on January 2, 2018 by glenenglish

The answer is pretty bad. It has a similar in-sub band spur output to radios like U5R etc that use a dual band radio chip.  Except this is much worse in the harmonic department because it has a 25W amplifier brick on the back end.

Ideally, all spurs should be below -36dBm on a radio that is designed to be connected to a decent antenna. Portable radios have a bit more leeway due to their suboptimal antennas. -36dBm is the European spec, -30dBm is the Australian spec AS4768 etc). FCC requirements for this sort of rig and power level are approx  -20dBm

The harmonics were measured carefully using a attenuator termination and a band pass filter at the harmonic to ensure the test gear harmonic performance was not in on the act.

The analyser used was a Rhode and Schwarz CMA-180, a pretty good modern test set. Highly recommended for analytical jobs like this.

This radio in my opinion is only suitable for operation using a harmonic filter. However… there are two bands with overlapping harmonic requirements, so a transmission line notch/stub filter is required that will provide harmonic suppression by means of overtone modes on the stub lines.

Otherwise, without a harmonic filter or a  harmonic insensitive bandpass filter, use at your own risk. Just don’t use it near a communications site ! At the bottom of a deep valley, sure.

How does an Icom/Kenwood/Yaesu/Alinco perform ?  The answer is well and much much better . The 3rd harmonics are usually ~ 65-70dB down and all other harmonics < -40dBm ! So it is not that hard, it is simply that these manufacturers have NFI about designing radios and understanding industry acceptable operational parameters. They should be prohibited imports. There is a reason the name brand radios are $$$.

So what’s it like as a FM voice radio ?

On TX- within a few ppm. The tx audio is low in mic gain.  The peak deviation that can be achieved by yelling into the microphone is 4.7kHz, however the average deviation approx 1 inch away from the mic talking loudly is  around 1kHz. So these radios will does like crap. The low frequency sensitivity is poor, below 800Hz, so they are low in audio and tinny.

On RX, the sensitivity is very high at  -127dBm 12dB SINAD but this ‘fantastic’ sensitivity comes at a price- the in band (600kHz spaced) 3rd order intercept point is approx -30dBm which is really poor .  My guess is that the designers simply put a wideband MMIC on the input to up the sensitivity and destroyed the strong signal performance.

To summarize, these radios are first class junk. The designers need to understand what is acceptable ., these radios are not. You get what you pay for. That’s why when you spend $300-$400 on a  Kenwood/Icom/Yaesu/Alinco dual bander, you get a high quality radio with RF spectral purity that meets industry expectations, a radio that has good TX audio and a radio that wont flake out everytime it gets within 10km of another transmitter. 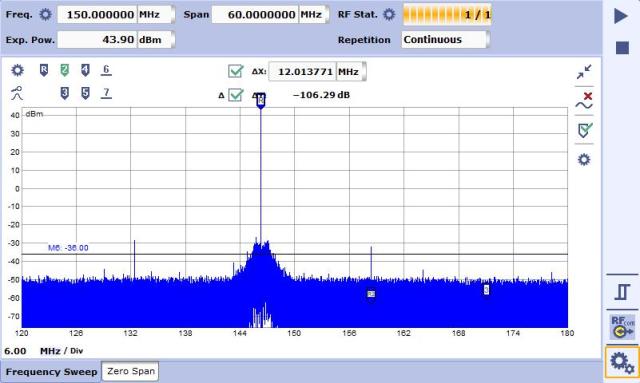 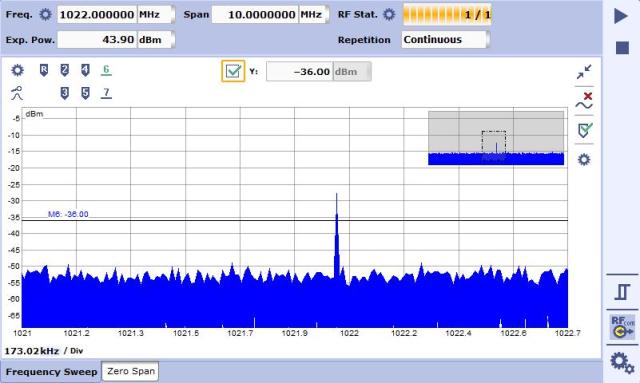 7th harmonic of 146 MHz in the aircraft nav band. Not cool ! -70dBc meets ham specs but does not meet industry acceptable specs, misses by about 10dB. 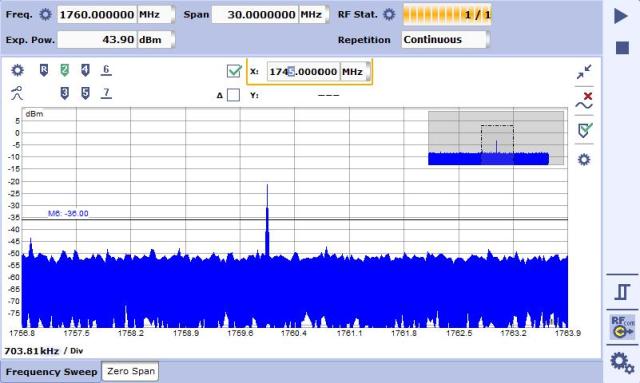 4th harmonic of 440 MHz. not so bad really. not great though.